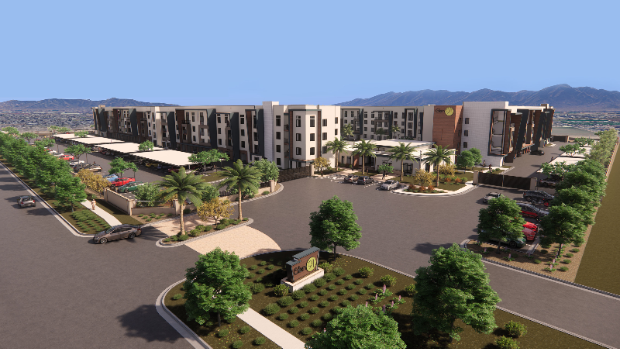 The West Valley leads the way in land sales in the Phoenix Metro area. With an ever-growing entertainment district, high-performing schools, private utility companies and an expanding infrastructure, the West Valley is an attractive territory for homebuilders and developers and new developments in the West Valley are being announced on a regular basis.Last week, Bill Lally, shareholder and zoning attorney at Tiffany & Bosco, P.A., and his team helped process five cases to completion for developments in the West Valley, all within 24 hours: two in Glendale on Tuesday evening, two in Maricopa County on Wednesday morning, and one in Phoenix on Wednesday afternoon.

“Our team worked very hard to finish June strong. Some of us were in Glendale until 11:00 PM Tuesday night, and then up for hearings starting bright and early the next morning,” Lally commented. “I am proud of our team for getting some tough cases over the finish line.”

June also brought a flurry of online meetings and hearings throughout the month, and on the whole, the West Valley continued to grab the attention of every facet of the real estate industry, including single family homes, apartments, industrial and retail.

Here’s a closer look at what’s to come:

The Glendale City Council approved the rezoning of 161 acres located at Bethany Home and the Loop 303. The case includes 94 acres of industrial, 19.5 acres of flex industrial and 47 acres of commercial uses that may accommodate a Love’s Travel Stop. After many hours of debate, the City Council voted to approve the zoning with additional stipulations. The project will produce a net financial benefit of $2.5 million annually to the city, helping to kick off over 21 million square feet of new employment uses along the Loop 303.

The Glendale City Council approved the rezoning of a 15-acre property at the southeast corner of Glendale Avenue and 91st Avenue for a mixed-use development. T&B attorney, Shaine Alleman, worked with the property owner over the past year on the general plan amendment and PAD rezoning applications. The first phase will include an exciting multifamily project called Glen91, which will be a distinctive, high quality, urban residential development. The remaining property is being targeted for a major hotel, office space, and other commercial retail users. This is an exciting addition to the adjacent Westgate area that continues to develop as a major entertainment and activity center for Glendale.

Lennar Corp. is paving the way for 279 new entry-level and first-time move up homes generally located at the northeast corner of Northern Avenue and Cotton Lane. Northern Crossing is located in District 4 of unincorporated Maricopa County. Lally worked alongside fellow T&B shareholder Ashley Zimmerman-Marsh to obtain a Comprehensive Plan Amendment and zone change for this property in March 2019, and assisted on the closing pieces to achieve Final Plat approval.

Lennar also received approval from the Phoenix City Council on a General Plan Amendment and rezoning request for property located in North Phoenix at the I-17 and Dixileta Drive. Lally and Marsh partnered with Lennar to obtain the approvals for these two requests, which will allow Lennar Homes to build a brand new, 228 lot residential subdivision over approximately 70 acres. As part of the rezoning approval, approximately 120 acres of separate hillside land will be donated to the City of Phoenix as a mountain preserve or park. This is a win-win for Lennar and the City of Phoenix with Lennar obtaining entitlements for this exciting new community and the City of Phoenix obtaining additional land as part of the beautiful Sonoran Preserve.